Phillip Lemley was born in southwest Arkansas. Growing up in Little Rock, he attended the University of Arkansas-Little Rock. During that time, he served eight years in the United States Marine Corps Reserves (USMCR).

Phil moved to Richland, Washington, in 2002 from Denver, Colorado after working and living all over the world, including the tropical island Penang, off the coast of Malaysia, south of Thailand.

Bechtel National Inc. sent him to Richland as a part of the electrical engineering group designing the Vitrification (vit) plant for the Department of Energy (DOE). Phil has over 40 years’ experience in the communications industry including engineering, construction, project management, and multiple system ownership in the telephone and cable television industry.

At the vit plant, he was the responsible engineer for the plant-wide communications / security network and chaired two safety councils, numerous American Red Cross blood drives, three United Way campaigns and a Washington State Department of Transportation’s Adopt-a-Highway clean-up program. He retired in 2009.

Phil's past service within the community includes the Richland Police Department’s Volunteers in Police Service, Executive Board of the Directors - Blue Mountain Council of the Boy Scouts of America, District Chairman of the Rattlesnake Ridge District of the Blue Mountain Council of the BSA, Benton Franklin American Red Cross Board of Directors and First Tee of Columbia Basin Board of Directors.

He also volunteers at the Kadlec Medical Center Emergency Room, every weekend and the Tri-City Food Banks every Monday. 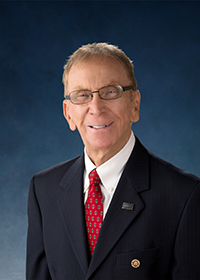